LATEST UPDATE: Matt Mullenweg kind of announced the release plan for WP 5.0 – the proposed release date is November 19, 2018. Although he also said “I’ll be keeping a close eye on feedback during the beta process and adjust as needed and keep the community fully up-to-date with our best estimate.” so in reality, this may take a little longer. At least we have a closer date estimate.

Millions of bloggers rely on WordPress, so it is hard to deny the benefits that this content-management platform offers. After all, it simplifies the creation of an optimized website where everything from theme installation to the actual posting runs smoothly.

Of course, WordPress is by no means the perfect solution, as it does have a few shortcomings, one of which is that the visual editor has not seen any notable changes over the years. Given how users like to see constant improvements that help them run blogs more effortlessly, this lack of innovation of the editor has been an annoyance for some.

When somebody mentions the last name “Gutenberg,” a lot of people may think about the German blacksmith, printer, and publisher who lived over five and a half centuries ago. In the realms of WordPress, however, Gutenberg stands for something else.

The Gutenberg rollout represents the latest update to the visual editor that has been in the works for quite some time. In fact, it was a direct response to the aforementioned concern related to the old editor that has not been updated for a long time. WordPress has been using the TinyMCE editor, which is a standard WISIWIG (what you see is what you get) text editor.

So, what are some of the most relevant advances that the Gutenberg editor brings to WordPress? Additionally, what exactly should users expect to see from this new addition to an already timeless platform?

Although Gutenberg has yet to reach the mainstream market, it is currently undergoing rigorous testing by the WP community. The Gutenberg editor has been available for beta testing in a form of a standalone plugin which you can install on your site to give it a test drive. Don’t worry about the relatively low rating score of the plugin – it simply reflects that people take in fundamental changes very difficult when it comes to a feature change like that.

You can also try the feel of the new visual without any modification to your website with a handy tool released on GitHub called Frontenberg – A frontend, logged out Gutenberg playground that lets you test out the new WordPress editor instantly.

The WP team who built Gutenberg look for feedback to help create the best version of the software possible. Once it goes public, those who want to use it will have to go through a re-installation process. Thus, the first thing that people should expect is to spend some time configuring Gutenberg and making sure that it is properly installed on their pre-existing website.

Can You Disable Gutenberg?

If you don’t want to use Gutenberg after it goes live with the official WP core release then you can still retrieve the “old TiniMCE” editor by installing a plugin called the Classic Editor. This will essentially disable Gutenberg and you can continue using the “legacy editor”.

We personally don’t advise you to disable it on the long term because after a while the updates, bug fixes and compatibility will be dropped for the current editor. At this point, you will be left with an outdated website where the compatibility gap is potentially much bigger and you will need to do a lot of work to catch up and make your site up to date.

As of the first quarter of 2018, more than 333 million domain names were actively registered, it is natural that bloggers want to have a unique website that will promote high conversions. Sometimes, however, this means being able to customize one’s code in order to make the necessary changes. With Gutenberg, there are a plethora of options to take advantage of in the form of blocks. 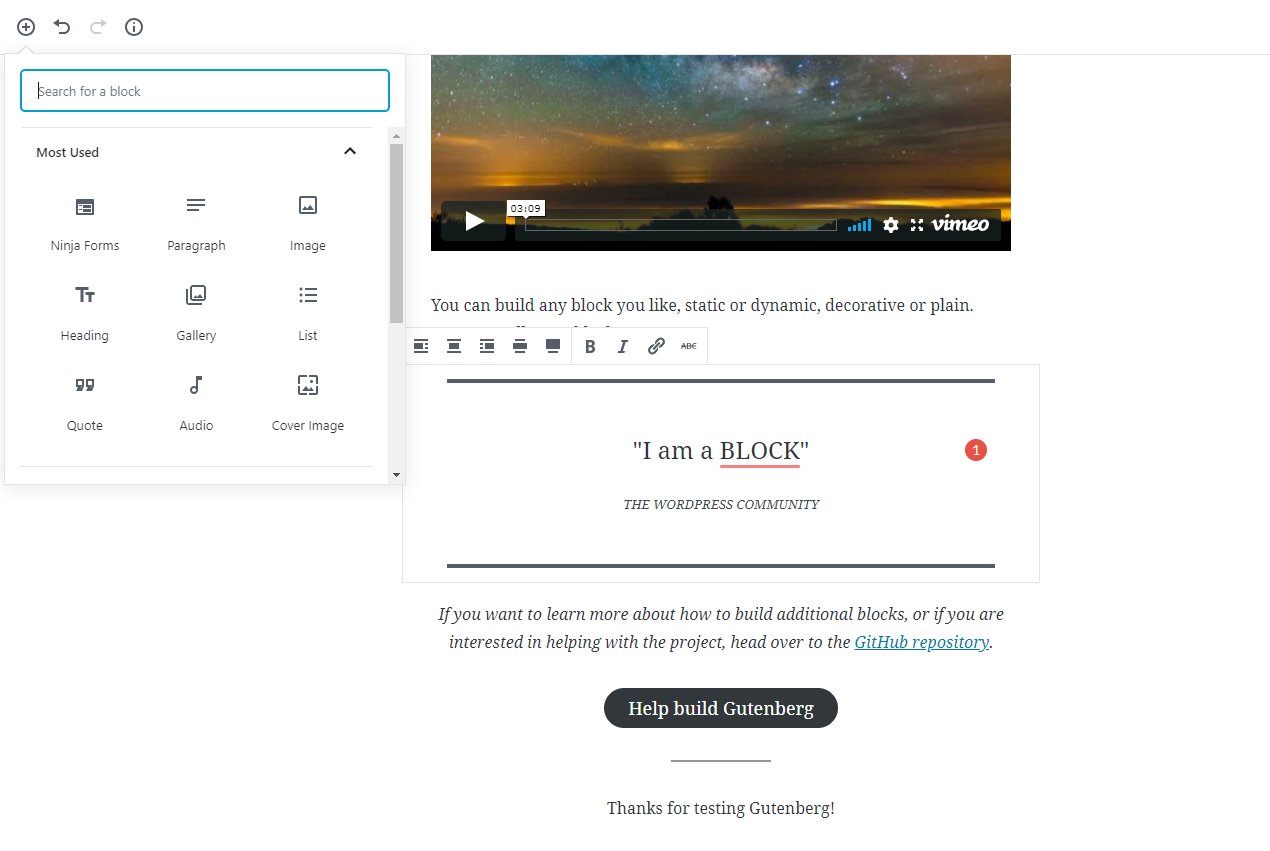 For example, one of the new features will be the so-called live HTML block. This will be a block in which the code entered can be previewed in real time. Just imagine how much easier it will be to track one’s work and ensure no mistakes are made. Also, other noteworthy features that the update will bring include:

Other notable developments bloggers will notice are fewer distractions and better use of screen space, not to mention that it will be easier for beginners to master as it was created in a beginner-friendly manner.

For instance, we love the little “i” icon in the top left corner that shows you a summary of your post – word, headings, blocks count and a document summary that really helps with structuring a page for best Search Engine Optimization practices without any additional SEO plugins.

Although Gutenberg will be simple to navigate, users will need to get accustomed to the basics before they can effortlessly manipulate entire site layouts. This means learning the editor’s specific guidelines and becoming efficient at changing things. Thus, some could label the time it would take to get adjusted to the change as a shortcoming. In reality, it is an expected part of every update.

Other potential shortcomings include things like the lack of markdown support and Gutenberg’s inability to support meta boxes. It is important to note, however, that the entire editor is currently in its testing stages. Meaning, the technical shortcomings just mentioned could be fixed before Gutenberg goes live.

Reasons behind changing the original editor?

Keeping up with the Competition

Let’s face it – the original rich-text editor of WP is extremely out of date and lacks a bunch of features. Although WordPress is the obvious leader in the CMS industry with 30%+ of websites built on the platform there are very strong contestants rising in the marketplace and taking a piece of the pie. Just look at the alternative website building platforms like Squarespace, Shopify, Weebly and Wix – they all offer drag n drop style, Do It Yourself page builders today. WP definitely felt the need to add this component and be in the competitive arena with these fast-growing alternative solutions.

Nearly every single best-selling premium theme nowadays integrates with some kind of visual page builder plugin. Imagine the power of features if some of these premium features were available as WordPress core blocks directly from the native post/page editor. The most popular page builders have tens of millions of users: Visual Composer (WPBakery), Elementor, Live Composer, Divi Builder, Beaver Builder, SiteOrigin Page Builder – just to mention a few – have all gained massive user community that proves that there is a huge demand for these features.

Many argue that the Gutenberg editor is actually loading the backed edit screens slower than the traditional Rich text editor. But look at the larger picture and take into account all the extra features you are getting and most importantly the possibility to replace a clunky third-party page builder plugin (see the previous list) that was most likely causing your site a massive overhead considering that most visual page builder plugins are very Javascript driven and use many external libraries to add extra functionality. So getting rid of the performance hinging extra plugins will definitely free up resources and make your site faster. And this is the real improvement Gutenberg will make – integrate premium options to the core.

At this point in time, there are only a small number of WordPress themes out there that are fully compatible with Gutenberg blocks.

Our dev team at StyledThemes.com are working on extensive testing and a throughout bug fix round to ensure that our most popular themes are up to date with the new visual drag-n-drop style visual editor and its elements by the time WP 5.0 is released. We aim to offer fully Gutenberg compatible themes by autumn and support the core blocks.

What is the release date of WP 5.0 Gutenberg?

The truth is, no one knows when is the exact release date for the Gutenberg editor natively integrated into the WordPress core. The WordPress.org core team hasn’t announced an official launch date yet.

Matt Mullenweg did a Q&A in Montreal during the second week of August where he was asked about when WordPress 5.0 release is expected, he said ‘most likely October’.

So in conclusion, like it or not, Gutenberg is coming so let’s be proactive and try it out and make sure your site is ready to be upgraded without a glitch.

Credits: Special thanks to Gary Stevens for his valuable contribution to this article